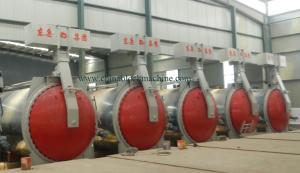 Areated block machine, Aerated Autoclaved concrete block machine, AAC.
1. Introduce
Areated concrete brick (light brick ) is the light and porous buidling material. It has light keeping temperature cant burn and other advantages. It can be made into many kinds of bricks (for example: 600X200X100, 80X80X180, 240X115X53, 600X200X125 ), they could be used industry building and common building. They are more and more popular in the world. In the future, they will replace the Clay brick completely.
2. Advantages
Light weight
Areated concrete density is usually 400-700kg/m3, (according the market ti produce ), same as 1/3 of clay brick and 1/5 common concrete. So use the Light brick can reduce the weight of the build more, and also reduce the beam of roof and pillar press best. Then you can see, it can save the material and cost, it also fighting shaking.
Keeping temperature
It has many are porous, the delivery hearting coefficient is 0.9-0.22W/(mk), the same as 1/4 or 1/5 of clay brick, so it is best materials now in the world.
Have many kinds material, have lowest waste
Main Material: Coal ash sand waste mine material coal stonestone dust and other silicon materials.
Save more land
When produce 10000 m3 light weight brick, will use 4200 Ton coal ash, and save coal ash using area 0.5 mu, save burning clay brick 5 mu.
Product description
Process:
1. First, dose and match measured raw materials
2. After distributing, feed raw material into pouring mixer to make slurry
3. Through thoroughly mixing, the slurry is poured to mould
4. After pre-curing under a certain temperture and time, the block would reach a certain hardness prepare for cutting
5. Tilting hoister would turn over 90 degree of mould
6. Then open the mould and separate it from block, and take the block woth side plate ti cutting cart
7. The blocks then be cut through the cutter firstly of two vertical sides of block
8. Secondly the horizontal cutting
9. Finally the vertical cutting
10. After cutting, the block is hanged to trolly with side plate by semi-finished product hoister
11. Organizing the cut blocks and put them into autoclave
12. Hardending the blocks under certain temperture and pressure
13. Take finished products out of autoclave
14. The finished product hoister take the finished product to stock shield
15. Packed for loading
16. The side plate return back by side plate roller
17. Side plate would be organized with open mould
18. Clean the mould and preparing for next pouring
19. Steel bars processing line for slab production&

Thank you! Your message has been sent to the following suppliers.